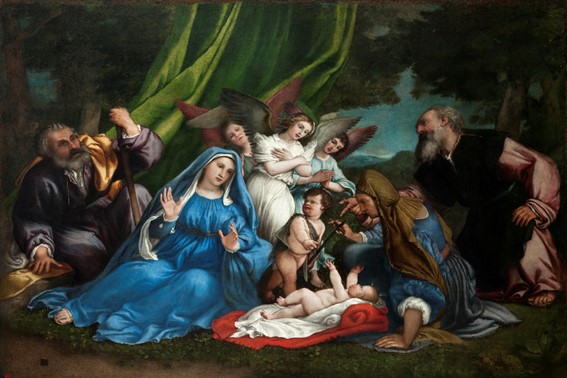 The Museum-Ancient Treasure of the Holy House is located on the upper floors of the western part of the majestic Apostolic Palace, which is to the left and in front of the Basilica. The Apostolic Palace has an impressive colonnade and a loggia which is Doric on the ground floor and Ionic on the upper floor. The museum houses an ample and heterogeneous art and faith heritage which comes from the Basilica or which was donated to the Holy House over the centuries.

Among the different works housed in the Museum, there are nine painted by Lotto (in the period 1480-1556) which largely decorated the ancient Chapel of the Choir. Some of them were painted by Lotto in the last years of his life, before he died in the Sanctuary of Loreto as an oblate of the Holy House.

Furthermore, there are paintings on tablet and on canvas, almost all of a religious nature, which adorned the altars of the Basilica; the majority of them were created in the second half of the sixteenth century. Then, there are two prestigious majolica collections, created in the workshops in Urbino in the sixteenth and seventeenth centuries and used in the Spice shop of the Holy House. Finally, there are the ten Flemish tapestries made between 1620-1624 on Raffaello’s cardboards (17th century), the wonderful coral altar furniture made in Trapani, contemporary art collections, images and objects of people’s devotion.